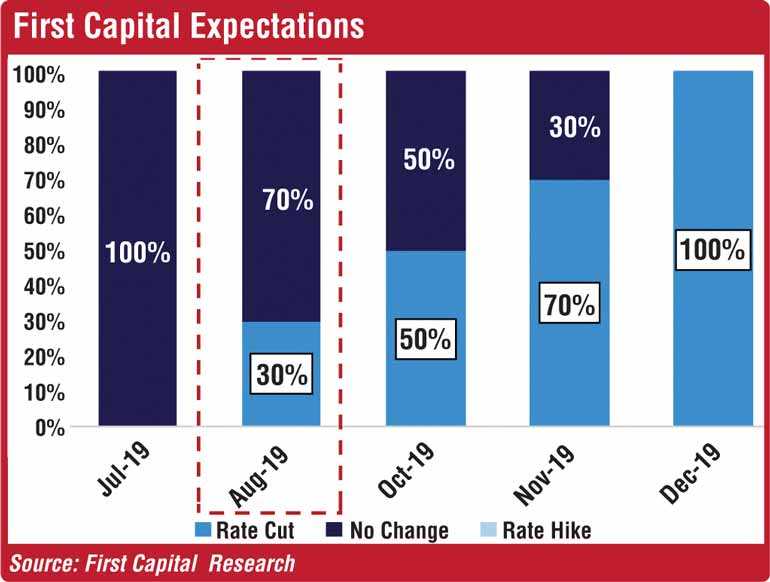 First Capital Research yesterday said it expects the Central Bank to keep its policy rates unchanged when it announces its latest monetary policy stance on Friday given external vulnerabilities and time needed for previous easing to come into effect but predicts a rate cut in the fourth quarter.

With manufacturing and credit signalling signs of recovery and the subsequent vulnerabilities affecting the external outlook of Sri Lanka, First Capital Research believes that the Central Bank may delay the monetary easing while also allowing the impact of previous rate cut to materialise, it said in a policy update.

“Accordingly, we assign a higher probability of 70% for a neutral policy stance at the upcoming policy meeting. Considering the slowness in the revival of economic growth, we would not rule out a possible lending rate cut though presently at a lower probability. Thereby, we maintain our August expectation of a 30% probability for a 25 bps rate cut for the SLFR as mentioned in our previous report. However, we are more biased for a rate cut towards 4Q2019,” it said.  Frist Capital Research said despite the Easter Sunday attacks, Sri Lanka’s economic outlook has shown signs of resilience and ability to recover as economic activities were seen returning to normalcy. As per the Purchasing Manager’s Index, manufacturing activities expanded at a higher rate in June, recording an index value of 53.9 which is an increase of 3.2 index points, compared to May.

This expansion in manufacturing PMI is mainly attributable to the recovery in Employment, especially, in manufacturing of food and beverages and textiles and wearing apparels sectors, from the lower employment availability experienced after the Easter Sunday attacks.

Services sector recovered in June from its lowest level recorded in May, which was mainly caused by the Easter Sunday attack. The recovery in Service activities is mainly attributable to expansion in New Businesses and Business Activity, and Expectations for Activity. Moreover, the industrial production of the manufacturing sector for the 2Q2019 increased by 0.6% to 103.4 relative to 102.8 in 2Q2018.

Following four months of declining fortunes, the LMD-Nielsen Business Confidence Index, shored up by 19 basis points to register 81 in June as the country is gradually emerging from the events that occurred towards the end of April. However, in July it dropped to 74 and it remains below its 12-month (89) as well as all-time (127) averages as the country has already begun preparing for the Presidential Election due at the end of the year.

“Private sector credit picked up in June to Rs. 63.2 billion, the highest credit growth for the year after contracting for two months in a row. In response to the measures taken previously, market deposit rates have declined although the transmission of recent easing of monetary conditions to market lending rates, including AWPR, is not yet complete.

“The high level of NPL in the system is expected to delay the downward adjustment in lending rates. However, in order to accelerate the reduction in lending rates, we expect CBSL to impose a cap on lending rates, thus supporting the revival of demand for credit by the private sector and the recovery in economic activity. These steps, in our view, are likely to get transmitted into lower lending rates in the banking system towards 4Q2019.

“The Government is expected to issue Request for Proposals to raise $ 500 million via Samurai bonds, which may boost reserves and enable finance debt repayments. The tender board must be first approved by the Cabinet and is expected take approximately one to two weeks to get through all the administrative procedures. With the foreign reserves at $ 8.3 billion as at July, the raising of $ 500 million is likely to support to maintain reserves around the $ 8 billion mark throughout the rest of 2019.”

On the external front, The Federal Reserve cut its rates for the first time since 2008 by 25bps ranging from 2.00% -2.25% to provide more support to the economy. First Capital Research expects slower growth and rising risks will impel the Fed to cut rates further before the end of this year. The anticipation comes as Goldman Sachs just announcing that it reduced its GDP projections by 0.2% and Bank of America Merrill Lynch said it sees increasing chances of a recession in the next 12 months.

“Although, lower US rates and eased monetary conditions worldwide was expected to assist Sri Lanka in attracting more foreign inflows, heavy foreign outflows have occurred in the recent two weeks with dollar bonds and rupee bonds spiking across the yield curve.

“Global trade tensions and heightened political uncertainties due to the upcoming elections are expected to have influenced foreign investors to revert back to the safe haven of the US Dollar and other less risky asset classes. Thereby, the rupee also has shown signs of weakness continuously depreciating over the last four weeks.”